Since starting his own firm in 1998, Daniel Y. Zohar is responsible for over $865 million in verdicts, settlements and administrative orders. A sampling of these results includes:

Zohar interviewed on KPCC’s Off Ramp about AEG lawsuit 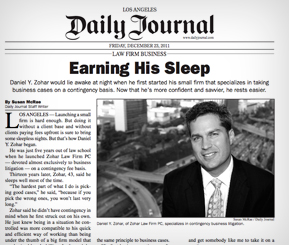 
For years Dan has fought tirelessly to protect our company's rights. He is committed to winning and never loses sight of the big picture. Whether developing legal strategy, conducting jury trials, or arguing before a judge, Dan displays masterful abilities rarely exhibited by other lawyers. He is exactly the sort of skilled and ethical advocate that corporate clients need in high stakes business litigation.

Daniel Y. Zohar is interviewed about his victory against Allstate. Listen